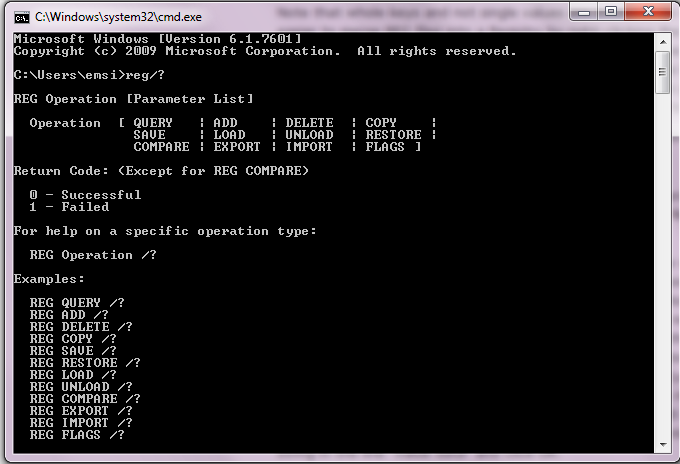 Special Offer for users attacked by Infection If you think your computer is infected with Infection, then we recommend to check your whole system. You can do this by using Spyhunter Professional Anti-Malware Program to deal with any infection that might be lurking along with Infection. This could save you hours and ensure that you don’t damage your system by deleting the incorrect files. Download SpyHunter Anti-Malware

This article is describing how you can make changes of your Windows Registry.

Additional information on how to view and modify the registryis available in the online Help topic in the Registry Editor (Regedit.exe). It is very IMPORTANT that you make a backup copy of the registry files (System.dat and User.dat) prior to trying anything with the registry.

It is essential to make a backup of the Windows Registry before you modify anything. You can backup the entire Registry by copying System.dat and User.dat or by exporting a single section of the Registry using REGEDIT.

The Registry has a hierarchal structure, although it looks complicated the structure is similar to the directory structure on your hard disk, with Regedit being similar to Windows Explorer.Each main branch (denoted by a folder icon in the Registry Editor, see figure 1)

is called a Hive, and Hives contains Keys. Each key can contain other keys (sometimes referred to as sub-keys), as well as Values. The values contain the actual information stored in the Registry.

There are six main branches, each containing a specific portion of the information stored in the Registry. They are as follows:

Each registry value is stored as one of five main data types:

Other data types not available through the standard registry editors include:

Regedit has some of the same menus that are so familiar throughout Windows. The menu bar can be seen near the top of Figure 1. Below there are the two most commonly used menus. 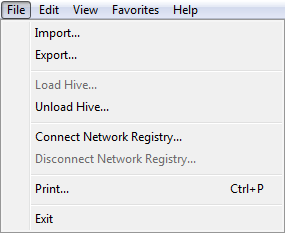 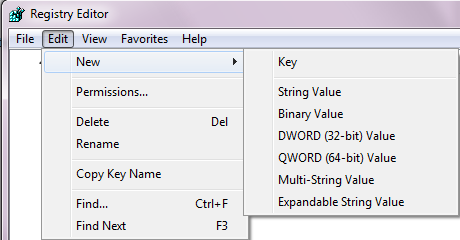 The File menu has the functions “Import” and “Export” that can be used to backup and restore individual Registry keys with REG files. The next section will have more detail about this important function.

As you would expect, the “Edit” menu is where commands are located for making changes to the Registry. Keys and values can be deleted, added, or renamed. (Permission settings on keys can also be edited but that is an advanced subject beyond our scope.) Another two very useful functions are “Find…” and “Find Next”. The Registry has thousands of keys and these search functions are very necessary. Unfortunately, the search function cannot find binary values or REG_DWORD entries. It searches key names, value names, and string data.

The Edit menu also contains a useful entry “Copy Key Name” that sends the path of the key to the clipboard, Since path names can be quite long, this can be very useful.

How to edit the Windows Registry without opening regedit.exe

You can edit the Windows Registry with the help of Console Registry Tool or reg.exe. Reg.exe is a command-line utility with which you can perform almost all the task which you otherwise can with regedit.exe.

Reg.exe can be useful when you want to quickly make a change to the Windows Registry without opening registry editor and moreover and has the additional facility of being directly usable in scripts.

To run the reg.exe, open cmd, type reg /? and hit Enter. This will show you the parameter list, syntax & the return codes.

Read, Set or Delete registry keys and values, save and restore from a .REG file.

Notes:
Any of the above commands can be run against a remote machine by adding \\MachineName to the command line, assuming the Remote Registry Service is running.
Registry data stored under HKCU will be visible and writable by the currently logged in user.
Registry data stored under HKLM will be visible to all users and writable by administrators.

REG RESTORE has a tendency not to work, possibly due to firewall issues, Export and Import are much more reliable.

The REG command will interpret \ as an escape for the character that immediately follows it.
To include a quote mark (“) in the data, prefix it with the escape character e.g. Here is \” a quote

This can cause problems with quoted directory paths because \” at the end of the line will be escaped.

To save a directory path with a trailing backslash (\) requires adding a second backslash to ‘escape the escape’
so for example instead of “C:\My Docs\” use “C:\My Docs\\”

To activate registry changes in HKEY_CURRENT_USER without logging off:
RUNDLL32.EXE, USER32.DLL,UpdatePerUserSystemParameters ,1 ,True

Find the location of the Start Menu folder:

Save a directory/registry path that ends with a backslash:

Save a REG_Expand_SZ value of %systemroot%

Run a script at first logon (Run Once) to do this we edit the Default User profile by temporarily loading it as ZZZ:

And so we come to the end of unveiling of the mysteries of the Registry. Go ahead and edit, but be careful.

ATTENTION, PLEASE!
Infection may have the ability to replicate itself, if not completely cleaned. This may require tracking down hundreds of files and registry keys. You can choose to use Spyhunter Professional Anti-Malware Program to deal with any infection that might be lurking along with Infection!